By Cash Michaels at The Carolinian

[UPDATE: On the Thursday, August 18, 2011 edition of "The Last Word with Lawrence O'Donnell" on MSNBC, Prof. Melissa Harris- Perry examined the alleged Koch Brothers connection to the 2009 Wake County School Board elections. Here is The News & Observer's WakeEd take on the segment.

In addition, here are three stories from Facing South, published by the Institute for Southern Studies. The first deals with the NC Americans for Prosperity revising history on school re-segregation. The second talks about the controversy surrounding the Brave New Film documentary on the Koch Brothers role in Wake School Board elections.

Finally the third focuses on conservative businessman Art Pope, and his Tea Party/AFP connections. The Koch Bros. have responded, denying the allegations.

Did money from wealthy conservative industrialists Charles and David Koch (pronounced “coke”) - money that has been documented to fund opposition against President Obama, fund the Tea Party movement and the campaign of controversial Wisconsin Republican Gov. Scott Walker - indirectly help bankroll the campaigns of the four Republicans who won the majority on the Wake County Public School Board in 2009, and dismantle Wake's socioeconomic diversity policy?

And will money from the libertarian billionaire brothers, whose politics swing to the extreme right, indirectly find its way into the coffers of this year’s school board GOP candidates, including Southeast Raleigh’s Venita Peyton.
A controversial new eleven-minute video titled, “Why the Koch Brothers Want To End Public Education,” produced by Robert Greenwald for Brave New Films, alleges that Koch brothers dollars indeed helped to fuel 2009 Wake School Board Republican candidates John Tedesco; Deborah Pickett; Debra Goldman and Charles Malone. The goal was resegregating Wake Public Schools, increasing the number of high poverty schools after dismantling the system’s socioeconomic diversity policy, and ultimately privatizing the school system once the white population deserted it.

Professor Walter Farrell, of the UNC - Chapel Hill School of Social Work, also says yes, and has been keeping a close eye nationally on who is donating to conservative candidates for office across the board, and why.

“Yes for the Wake School Board and the NC Legislature,” he told The Carolinian. “I am including them in an article I am currently developing for publication.”
“I have reviewed the campaign finance reports of elected officials across the country--minority and majority--whose elections have been bankrolled by the Koch brothers at every level: school board, State Assembly and Senate, U.S. House and Senate.” 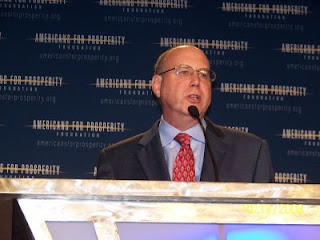 Officials with the Tea Party-backed NC Americans for Prosperity refute the film’s contention that the NCAFP bankrolled the 2009 GOP Wake candidates at all, let alone with money funneled from the Koch brothers.  It is a well-established fact, however, that area businessman and one-time state lawmaker, Art Pope of Raleigh, did contribute $15,000 to the candidates.
Pope sits on the national board of the AFP, and AFP is funded, in large part, by the Koch brothers, as is the Tea Party movement.
Dr. Farrell says he’s reviewed the same campaign reports that the producers of the film relied on, and he’s clear that there is a Koch brothers’ connection.
He says the industrialists have a “strategy of public school re-segregation throughout the nation” by funding conservative candidates.
“They do so directly and indirectly thru their numerous 527s and in collaboration with their conservative multi-millionaire and billionaire colleagues (including local millionaires Pope and Robert Luddy) who attend their biennial retreats in Palm Springs, CA and special meetings in Vail, CO,” Dr. Farrell wrote.

“The main thing is be sure to check all the various committees,” he toldThe Carolinian. “My opinion, frankly, is that there is big funny business going on in those committees--they give each other money, they give to Candidate X who gives to Candidate Y, etc. Also, of course, they give lovely untraceable cash.”
Dr. Farrell also alleges that District 4 Wake School Board candidate Venita Peyton, a Republican, will also see Koch brothers’ money funneled to her campaign.
“The Koch Bros., et. al. and their allies are also funding the campaign of local black serial candidate for public office, Venita Peyton, who was put in the race against [Democratic incumbent] Keith Sutton in order to dilute efforts to upend the Republican majority,” Farrell maintains.
Peyton has not responded to a recent Carolinian request for comment. But on Monday, The News and Observer’s WakeEd blog  reported that, “…it looks like …Venita Peyton is willing to throw around some cash to take on incumbent Keith Sutton.” Peyton filed paperwork with the State Elections Board “withdrawing her plan to spend less than $1,000 in the District 4 race.”
Peyton already has the endorsement of the Wake County Republican Party, and is likely to get other conservative thumbs up.
Last spring, long before the Brave New Films video came out, Dr. Farrell published a paper titled, “Inching Towards Resegregation and Poverty Concentration in Wake Schools.”
In the paper’s first paragraph Farrell wrote, “The Wake County’s Public School System is the latest urban district targeted for dismantling and privatization, an initiative begun under the administration of [Pres.] Ronald Reagan when tuition tax credits were proposed as a solution to the challenges of urban education.”
Later in that research paper, Farrell wrote, “Although the debate has focused on the elimination of Wake’s socioeconomic diversity policy, the real objective is the dismantling of public education as we know it.  This will be achieved via the removal of the cap on charter schools and the establishment of publicly-funded vouchers that can be used at private and religious schools--legislation introduced by newly chosen North Carolina Assembly Majority Leader, Paul Stam.”
Indeed, those bills were introduced in the  Republican-controlled NC Legislature, but the GOP backed off passage after Democrats and their supporters raised their ire.
Farrell continued, “This is the publicly stated plan of local, multi-millionaire businessmen, Art Pope and Bob Luddy, who are largely responsible for the election of the Wake School Board majority and of Republican majorities in both houses of the North Carolina Legislature.
“Pope and Luddy are aided in their quest by the billionaire Wichita industrialists, Charles and David Koch, who also fund candidates in school board, city council, county commission, state legislative and federal races throughout the nation to advance their privatization and anti-union agenda.  (They funded the recent attacks on collective bargaining and public education in Wisconsin.),” Farrell’s paper continues.
“A casual review of campaign finance reports for the Wake County School Board and the NC Legislative Republican majorities reveals significant contributions from Luddy, Pope, Koch brothers-controlled political action committees, and their corporate, pro-privatization of public education allies throughout the nation,” Dr. Farrell added.
To allege that the Koch brothers would even have an interest in local public schools issues isn’t really a stretch. Many people forget that in 1980, David Koch ran for vice president of the United States.
According to an August 2010 New York Times expose’ titled, “The Billionaires Bankrolling the Tea Party,” then Times columnist Frank Rich wrote, “…his campaign called for the abolition not just of Social Security, federal regulatory agencies and welfare but also of the F.B.I., the C.I.A., and public schools — in other words, any government enterprise that would either inhibit his business profits or increase his taxes.”
Last February, US News  and World Report writer Peter Fenn wrote, “They funnel money through 501c3 tax-exempt foundations, and they give money to other foundations, lobbying organizations, and right wing think tanks. They have PACs; they support candidates. Only a small portion of what they control do they divulge."
Fenn continued, “…the Koch brothers have personally given over $2 million to candidates over the last 12 years, their PAC has contributed $8 million to candidates, and they have spent $50 million on lobbying.”
Just last week, an online publication called “The Nevada View” published a story titled, “Is Koch Brothers Money Killing Nevada’s Schools?” In the piece, reporter Angie Sullivan tracked the Nevada Policy Research Institute to a master list of the State Policy Network, a national network of conservative think tanks. The concern was that local conservative think tanks were having undue influence in the Nevada Legislature concerning public school policy, and getting their funding from outside the state.
A close look at the foundations funding the local Nevada conservative think tanks show that the Charles G. Koch Charitable Foundation was a key contributor. Two of the SPN member think tanks in North Carolina are the John Locke Foundation and the John William Pope Civitas Institute, both in Raleigh. And one of its many associate members is Americans for Prosperity Foundation. All three have been recipients of Koch brothers’ largess and generosity.
And all three have weighed in heavily, both against Wake County’s previous student socioeconomic diversity policy, and for the Wake School Board’s neighborhood schools policy that would keep black and Hispanic students in their own neighborhood high poverty schools.
Just this week, Republican Wake School Board Chairman Ron Margiotta, who is close to Pope and Luddy (used to serve on Luddy's private school board), and hired the Civitas Institute to conduct orientation for new Wake School Board members, maintained that he will not support the suggested “blue” school choice plan if it sent black and Hispanic students back to suburban schools, just like the previous student diversity policy did.
Do you like this post?
get the word out
Tweet